This is an old sculpt that I dug out and photographed today, it's Boris Karloff from "The Black Cat." It was done in Sculpey and very tiny - about 3/4" high.
Posted by Webster Colcord at 9:22 PM 3 comments: 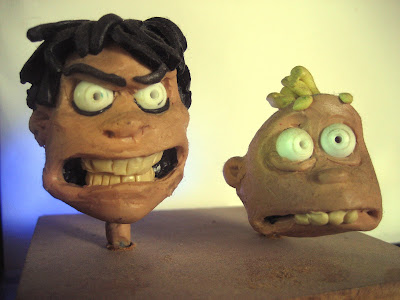 At one point during the lengthy production of "Extreme Man & Insane Boy" I considered animating them in clay. Here's the sculpts that I came up with. They're pretty old now and they've gotten kind of dusty. Also the irises were never painted.
Posted by Webster Colcord at 8:09 PM 7 comments:

one of my old cartoons on Vimeo

In pursuit of his ambition to become a super hero, Extreme Man sits in his hilltop bunker waiting for word of criminal activity over his stolen police radio. Fueled by comic books and paranoia, the hostile and incompetent ex-actor turned crimefighter has managed to assemble the accessories of a super hero, including a military vehicle which he calls the "Extreme Machine" and his sidekick, Insane Boy, who escaped from a mental institution and spends most of his time in a straight jacket.

The city below is a burned-out and nearly vacant husk of what was once a great metropolis. In this decrepit environment a small group of mutated super-villians have set up a social club in which they scheme their next attack on what remains of civil society. With grim determination our two heroes square off against the loose coalition of villains. Meanwhile the bad guys, led by the Screaming Skull, try to keep an optimistic party-like atmosphere going whenever possible. 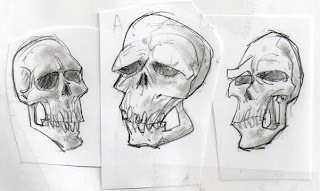 Haven't posted anything in awhile... sitting in a meeting today, doodled some cartoony skulls.
Posted by Webster Colcord at 11:08 PM 2 comments:

I've been uploading my old work to Vimeo, here's "Underground Robot" which was done in 2002 as a series pitch to Nickelodeon. I also sent it to Cartoon Network, but nothing came of it. The test was very popular on YouTube, though, and I would love to finish it as a short film. 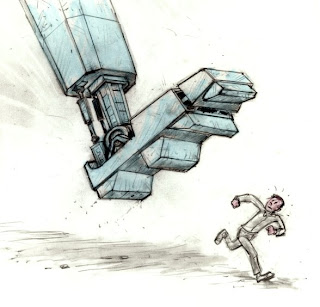 I ran my own boutique animation studio -starting in earnest in 1993- animating and directing in a variety of media with a small group of friends in Portland, Oregon. In 1997 I took a job with PDI/ Dreamworks and moved to the San Francisco Bay area, but I continued to do some small pieces on my own, including the Nick Jr. logo at the end of this reel. 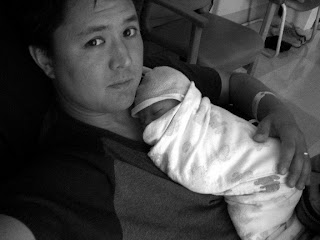 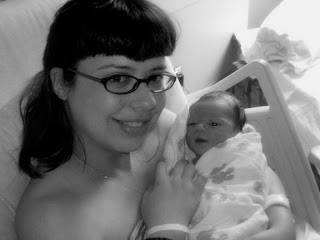 5 hours of pushing by Erin (my hero).
We've noticed that he likes to stretch his body out.
Posted by Webster Colcord at 2:00 AM 9 comments:

Left side - a cel animated dog walk, middle - a CG walk for a commercial directed by Genndy Tartakovsky, right - a CG animated alien walk for an Intel commercial.

Posted by Webster Colcord at 8:25 AM 3 comments:

Posted by Webster Colcord at 1:01 AM 2 comments:

Two versions of the title for an indie feature film entitled "House of Jazz". I animated this in CG and rendered with Maya's built-in toon render. The film had a psychedelic horror theme and was directed by Jacques Boyreau. Unfortunately he changed the name of the movie after I finished these titles. And the project stalled in the editing phase.

An amphibious creature emerging from a pond, pencil 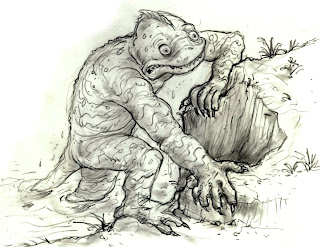 Just started uploading to Vimeo, here's a test for The Dandy Warhols "Valerie Yum" song which I did a month or so ago. The cat animation is a cycle that I roto-mated from footage I shot of our cat, Willa, and placed into a destruction environment from a "big movie" that I worked on. So it's cycle animation and recycled environment. Courtney Taylor-Taylor (their lead singer) liked it but I'm not sure that it will get any farther than this test -

Posted by Webster Colcord at 6:23 PM No comments: 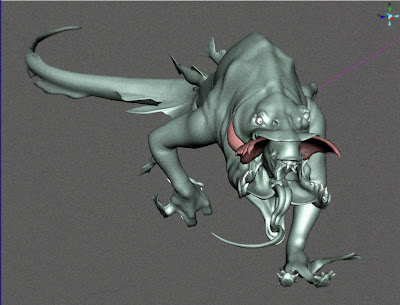 Working on revamping my old site by turning it into a blog, wish me luck. Here's a frame of a run cycle of The Host from 2005...
Posted by Webster Colcord at 7:37 PM No comments: