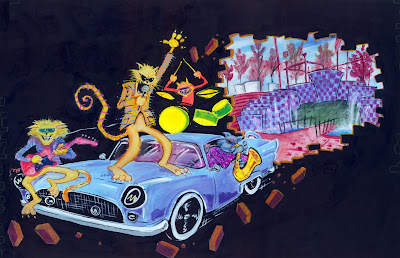 Folks familiar with Portland may recognize the Pioneer Square fountain in the background, which is where the concert took place. The black negative space in was intended for text, the brick-shaped lines around the edges were meant to be dye-cut on the sides of the posters. It would have been a pretty ambitious print job. Ben helped with ideas, the layout and pencil underdrawing. I did the painting.
Posted by Webster Colcord at 9:58 AM